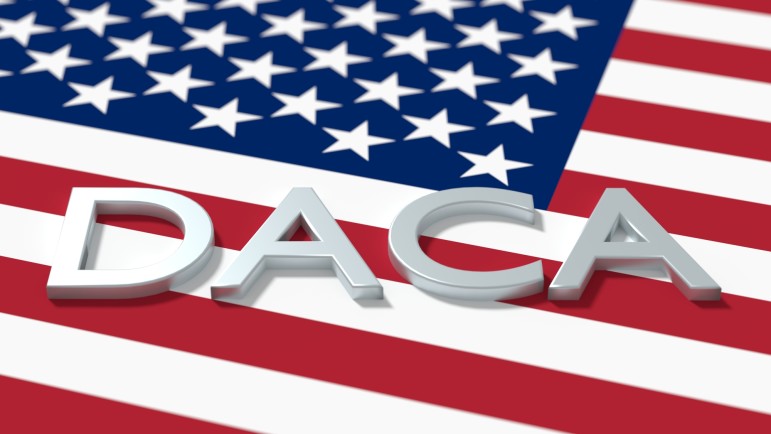 DACA (Deferred Action for Childhood Arrivals) have helped a lot of illegal immigrants stay in the country legally. The Trump Administration wants Congress to deal with the issue and create a solution as long it has a border wall, bans chain migration, ends visa lottery system, and establishes a merit system for all immigrants who want to come into the country. If Congress fails to achieve that goal, then the program will eventually be eliminated. This would make it legal for an immigration officer to find them and deport them back to their country of origin.

In 2012, the Obama Administration signed an executive order for the DACA program. It keeps illegal immigrants from getting deported. The DACA program has about 800,000 people according to foxnews.com. The 800,000 illegal immigrants under DACA can receive a drivers license, work permit, and other benefits. That means 800,000 Americans may not get an opportunity to get a job or go to school, which means one of those Americans may be you. If you are undocumented immigrant you may apply to DACA if you are under the age of 31. On the other hand, a lot of sources say the dreamers are children, but most of them are not children. 31 is not a child. The program is not a gateway to citizenship.

Depending on the state, DACA receipts can get state assistance, like health care, grants, and loans. These people can apply for these loans on the DACA program. After getting loans and affordable health care, grants, and education, they could leave the country. If they do leave, it means the state has to find revenue that they gave to the illegal immigrant. The government has to find a way to get their money back if its state-funded than federally funded. The American taxpayer would have to pay more in taxes because of an illegal immigrant. The state of California is a sanctuary state, where the governor Jerry Brown boosted the gas prices by increases taxes. Maybe he increased the gas tax because of what I stated above. Not designed to help improve roads, but to provide it for illegal aliens.

The Dreamers have to be in high school, have a high school diploma, or a G.E.D. and can not have an adverse criminal record. No felonies and no more than three misdemeanors, however, people that have a high crime rate will not be allowed to apply for DACA, or continue to be on the DACA program. The DACA receipts have to renew every two years. A lot of people are trying to fight for the dreamers to keep them here in America. Many people ask if they have been living inside United States since they were between the ages of 16-31 or even when they came to America when they were just babies; why haven’t they applied to become a citizen. Ignorance of the law should not be tolerated. However, they can become a citizens by following the proper path to citizenship.

You can register online to become a citizen if the person is under 18, they will call you, or you can call them, just follow the steps to become a citizen according to uscis.gov. It is not fair for people that come to America legally and do it the right way; it is not okay for an illegal alien to come here illegally and not be punished for it. DACA is a way for an illegal immigrant to stay here without getting deported. California, Colorado, Illinois, New Mexico, Oregon, and Vermont are states that do not help enforce federal law. If people can’t get on the DACA program, they will undoubtedly go to these places, which could mean putting an American citizen in danger. We don’t want people to be in danger; there are reasons why an illegal immigrant can’t come unless they are a citizen or have a visa. In the end, this would benefit the immigrants who wish to become citizens, but also help America become a stronger economic power for all citizens living in the nation.