Is A legal Prostitution Industry The Future Of The Economy 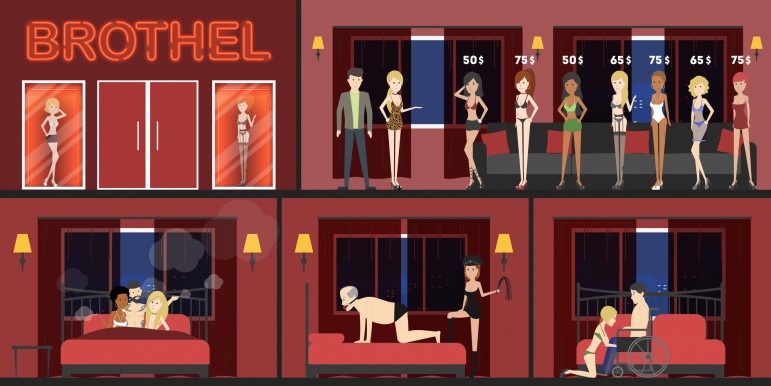 The world economy is changing vastly with the introduction of new technologies, which is hurting employees and hampering industries. Artificial intelligence, internet, robots, and other technology will eliminate industries in the future, which will hurt employment. However, one industry that has always been here and has survived since the beginning of times is the prostitution industry. If prostitution would become entirely legal across the United States, then the benefits will be economic growth, reduction in crime, and reduce healthcare cost.

Many ancient societies have suffered from economic depressions, or recessions, which could have destroyed their empire. For example, ancient Rome would tax every prostitute 50 percent during significant recessions. As a result, Rome manage to collect its way out of the recession. In today’s world, America and other nations are dealing with technology that might eliminate the human workforce in many industries. As technology eliminates employment, more people will lose their job and career. Some solutions have been universal income, or better education programs to train people earlier for a career in a field as to combat the upcoming change. However, that might not be enough with ever faster technology innovation.

On the other hand, the best solution is to legalize prostitution across the nation to benefit the country economically. America is a nation of many different skin colors and sexualities. Sex has been here since the beginning of times and will not leave in the future. A legal prostitution industry can be the dominant economic boom for the American economy, while every other sector might suffer from innovation in technology to replace human labor. The sex industry will always be here and will establish jobs with little education, while at the same time being a professional industry that is high class.

The economic wealth from the legal prostitution industry will help to cut down on crime. More people engaging in sexual activity will reduce depression and anxiety. One statistic from the American economic journal found that drug crime dropped by 25 percent where prostitution was legal. When the state Rhode Island accidentally legalized prostitution in the 1980s and became illegal in 2009 statistics found the rape dropped 31 percent. The legal prostitution industry doesn’t help create economic wealth, but also cutting crime, which helps to reduce tax money going to law enforcement and the justice system. Instead, that money can go to education for job training in future fields, which will also be beneficial in preventing crime across the nation.

Finally, cutting healthcare cost is essential to all Americans. America has some of the highest HIV rates compared to the other industrial nations. The United States has 1.1 million people living with HIV. Having a legal industry will help to reduce HIV infection and STDs because the prostitution industry is a business. HIV test every month, STD test every week, and condoms used every time in sexual activity. The legal system of prostitution would reduce HIV and STD transmission by having a selection of prostitutes who will engage in safe sex.

In the end, legal prostitution can be beneficial to society by reducing crime, sexual diseases, and create economic growth. Times are changing fast, and industries are dying out because of the changes in technology. These changes can seriously hurt employees for many workers; however, legal prostitution can keep many employed, since prostitution has survived the test of time as being the oldest profession.