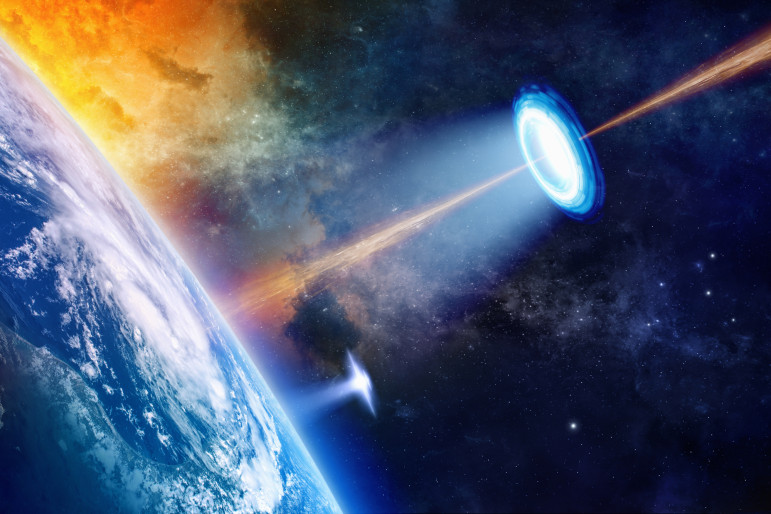 An alien invasion on earth is less likely to happen, but there is always that one percent chance. It would shock mankind because human beings are not mentally prepared for that type of an event. What if an alien attack does occur, how would Earth be threatened?

One of the most significant signs aliens can see is that the earth has many lights that can be seen light years away. Headlights from cars, street lights, business lights, and other lights make earth noticeable according to earthobservatory.nasa.gov. All these lights will put the planet in danger. As we know now at least all the planets that have been discovered do not have these feature.

The solution to fixing the light phenomenon: In the future, it is essential to create energy that makes technology more efficient to expand society on Earth and to other planets. This just doesn’t include power, but also medical technology as well. Human beings need light to see because naturally human beings do not have the gift to look at night. However, as human cloning and other medical technology improves the ability to create eyes or design them will increase survival on Earth, but also outer space. This will eliminate the need for lights on Earth, especially if you expand towards other planets like the moon and mars.

Satellites around the Earth can also become a threat if an alien invasion happens. Satellites orbiting the Earth can be hacked into, which can give away military sites, nuclear sites, space sites, and observation of human behavior. These satellites can shut down everything within society, which can create chaos.

The Solution United Nations Alien Contact Protocol: It is essential to put warning systems in place to give earth time to prepare for this type of invasion.By putting satellites on all planets and moons in our solar system, this will provide us with extra time. These satellites will be watching those worlds, but also outer space to see anything unusual. By establishing an early warning system, we might see those satellites get hacked first or come down completely. It will give us the ability to see and figure out what is happening. The United States along with the United Nations should establish a treaty to work together in case of an event is to a occur according to seti.org.

Another alien threat is just merely using an asteroid to destroy Earth. The danger of attack by an asteroid that can hit the sea, which could create a flood. The sea covers 75 percent of the Earth and is increasing with global warming. As it is stated in the Bible and other ancient text the flood destroyed societies. Some experts claim technology was just like it is today, but more significant until the flood happen. Another flood can bring man back to caves, lost history, and lost intelligence.

The solution Mars Information: It is important to expand to mars to increase human life and to establish colonies. In theory to develop and to enhance the human experience on Mars, we should move earth water to mars, which will help to build a life on Mars for humans. Of course, only take 45 percent of earth water to level it out. In case there is a flood having 50 percent of water in the ocean won’t be that devastated compared to 95 percent of water in the sea. However, it is also essential to have a human, animal, and plant cloning program to go along with this space program to make sure mars is successful. Plant and animal program is designed to bring food and develop the environment for mars. The Human cloning program is tested alien diseases and finding vaccines for those diseases, or to test treatments.

Here are three examples of how Earth is in danger of an alien invasion, but also some solutions. Of course, if there is intelligent life out there, they can get passed these defensives. On the other hand, maybe not.